Dashing through the ‘forge

One new feature of this Winter Veil  is the introduction of Greatfather Winter’s sled.  It has a fixed path through Ironforge, idling just in front of the pile o gifts.  When it’s idling (hovering in place) you can click on the sled to drive it, or one of the reindeer to ride them. In a few moments you’re off on an enchanted ride through Ironforge.

Posted in holidays, only smaller

It is the time of year that we celebrate the Finding of the Cat That Lived, Jaina, a mostly Birman but also bits of other cats cat.

For those that missed out on the first seven installments, we found baby Jaina wondering around in the parking lot and scooped her up. Later, when we took her to the vet, we were told she had FIP, which is fatal, and that she had weeks to live.  Well, here we are eight years later, and she’s middle aged without showing any sign of keeling over.   And so today we celebrate her continued life. 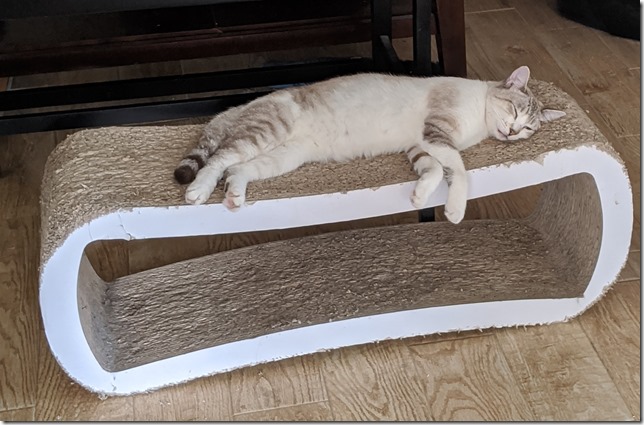 First, a few updates on her fellows. The cat we called “Sparta” last year is in fact male and thus is now called “Spartacus”.  He’s been spending more time inside week to week, so we’re hoping he eventually gets used to the idea of not going out at all. He’s a gentle soul that really belongs inside where he won’t get roughed up. He’s shown up limping – badly – a few times, though so far he’s healed up okay.

Then there’s the next generation – mama managed to get knocked up again and had a litter of five. Same mix as last time – two white ones (like Spartacus), one that looks like daddy, one that is black and white, one that is black and white with a floofy tail.  Whatever genes are being expressed, they’re strong. White cat #1 wandered off early, the rest are sticking around. White cat #2 is almost identical to Spartacus, except he has a pink nose, and Sparty has a dark nose.

Most notable in the bunch is the runt of the litter, a calico kitty with a floofy tail and some face floof as well. She’s just adorable as hell and bold as brass, and has taken to coming inside to hang out and play with the kitty toys. I call her Monster, but she’s really quite sweet. We’ll see if we can domesticate her over this coming year.

Our attempt to substitute Jaina’s string with a fresh one has not worked out that well. She knows the difference, and does not treat the new string as an equal. In fact, I haven’t seen her carry it around while singing yet. She’s not fooled by our trickery. But we’ll keep trying.

Jaina’s been developing a game over the past few years that runs something like this: she waits in the hallway for me to notice her, then she lets out a little trill and goes running as hard as she can the opposite way.  When I come to look in on her, she does the same thing.  This repeats over a few cycles until she ends up in the front bathroom’s bathtub.  At that point I really don’t know what the next step in the game is.  I’ve been trying to catch this with the camera but she’s a mite unpredictable so, so far no luck. 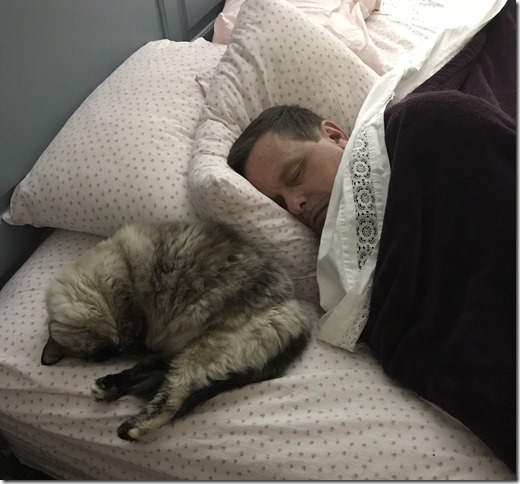 The wife and I have swapped sides of the bed again. As expected, Jaina still prefers the corner of the bed closest to the door, though she will sometimes go out of her way to go lay on mommy’s arm and sleep.

Jaina continues to hate Morgan (who we’ve just been calling Tater) with the heat of a thousand suns.  It’s almost hilarious to see Jaina go after a cat twice her size and win the day.  Tater is pretty belligerent with people, but she can’t get a handle on Jaina, apparently.

A new part of Jaina’s morning routine has become birb watching. She’ll get on the shelf by the back window and watch the blue jays stealing the outside kittys’ kibble (which makes them into kibble sometimes themselves). She hunkers down and looks like she’s thinking THEY SUSPECT NOTHING as she watches their antics.

It has been another blessed year with our little Bearcat, and I’m looking forward to the next one with her. Here’s to many more. 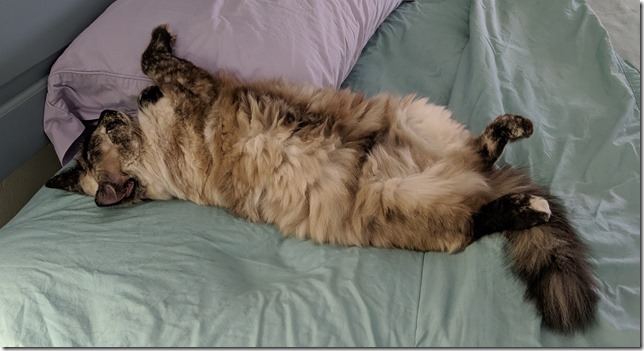 Posted in The Cat that Lived