Six years ago today we found a little ball of fur wandering across the parking lot of our apartment complex. We took her in, and she took over.

A couple of weeks after we found her

We call her The Cat that Lived because the vet we took her to diagnosed her with FIP, which is fatal and untreatable.  We promised her all the scritches she could want and as happy a life as we could give her in her final weeks.  And then she went and kept on living.  Six years later, she’s still going strong, sassy as they come and full of opinions. We named her Jaina because she was a survivor (this was just after Tides of War came out).  It appears we chose wisely.

A few things have changed in the last year.  We lost one of her compatriots, an old Maine Coon Cat named Pogo, who passed in her sleep not too long ago.   She was especially dear to Mrs Grimm, who took it hard, as can be expected. Floof Kitty was a real sweetie.  She never bothered the other kitties, just asked for laps about eight times a day, and we gave them whenever she asked (‘asked’).

Morgan, aka ‘Tater’, has grown in to a very substantial kitty, and not much of it is flab. Her probable dad was a big feller, and she appears to be taking after him. She’s probably twice Jaina’s size now, which makes for an amusing sight when Jaina goes after her and she goes running for her life. 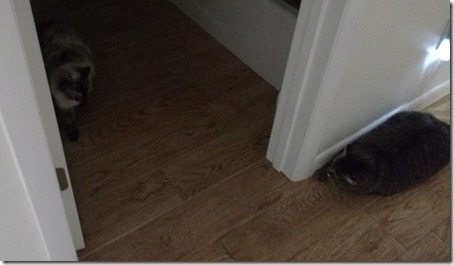 I sense a disturbance …

Zoey, the sixteen pound black cat (aka ‘Cannonball’), has started realizing that she’s the biggest cat in the house aside from Petey (a very large floof cat of some sort), and has started going after Jaina from time to time. Sometimes she gets a snoot full of Jaina claws, and sometimes Jaina goes running (and hissing, and growling).  Still, Jaina’s holding her own, even if she is the smallest cat in the house. 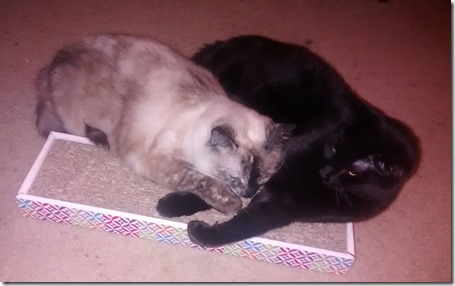 It’s pretty odd considering that the two used to be the best of pals.

Jaina has developed a taste for laps. Not from me, but from mommy. She will get comfy and just vegetate for hours. It’s very sweet.

She still has the shape and demeanor of a little bear, but I’ve also noticed something about here that I wasn’t able to put my finger on. She always seemed, well, kind of pensive and downcast. Eventually I realized that she has especially bushy eyebrows, and that makes her eyes appear to be looking down unless you are looking at her straight on.

She still has her favorite toy or teddy bear, whatever you call it – a shoestring. When she wants someone to come admire her, she’ll grab the string and drag it around while singing.  Scritch her on top of the head and she’s happy as can be. 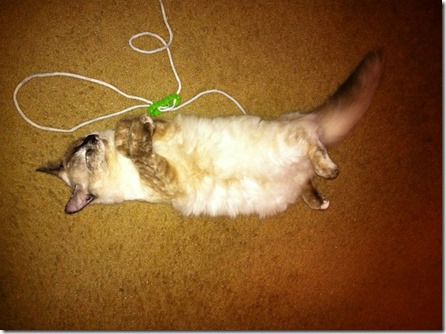 This is my string. There are many like it, but this one is mine.

She has also taken to herding me off to bed. She’ll jump up on the desk next to my mouse pad.  Eventually she’ll edge close enough to where she’s sitting ON the mouse. If I try to move it then, I lose an appendage.  As soon as I get up, she jumps into my chair and settles in for a nap.  No, we’re not pwned or anything.

Moving forward, we hope to see more antics and amusements from this little kitty.  Maybe this year she’ll start asking for cuddles from me. One can hope! 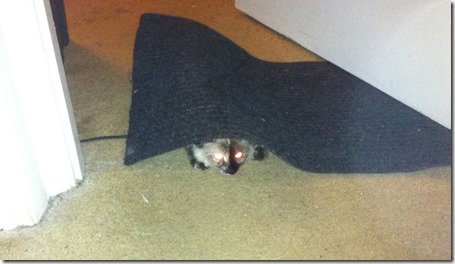 Posted on December 21, 2017, in The Cat that Lived. Bookmark the permalink. Leave a comment.