← Awkward
It Kinda Grows on Ya →

Highmountain is full of flight points that are extremely convenient for some world quests, but which are not entirely clear on how to get to them. In many cases, there are no bread crumbs leading you there or anything like this.

And while there are no end of YouTube vids showing you how to get to them, I’m sick of YT/Twitch echo chamber celebs that aren’t really part of our tribe trying to cash in – it’s like clickbait, 2010’s style.

Anyway, to the far east of Highmountain is a lonely enclave that is inhabited by an odd bunch of Taurens called the Prepfoot Tribe.  These guys are preparing for the return of Deathwing – regardless of repeatedly being told that he came, we kicked his ass, and they totally survived it.  By “prepare”, I mean they’re preparing by stockpiling stuff and wearing waterproof helms. They don’t offer any quests or rep, but they do have a flight point that is convenient to a number of world quests on the coast.  But, since there are no quests or any other involvement with the rest of the world, it’s up to you to discover the way to get there. 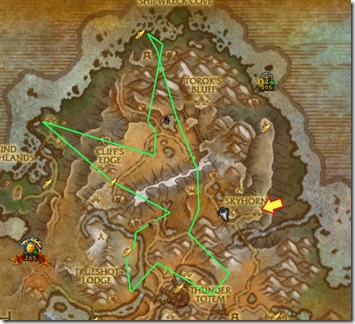 First of all, go to the Skyhorn flight point. This is your starting point.  From there, take the path to the south until you see a branch to the left –  this will take you to The Sepulcher of the Sky. Depending on where you are in your Highmountain questing, the Kolbolds there may or may not be hostile to you.

Directly across from where you enter the area, there’s a grassy drop off. Go over to that, that’s the start of the path to the Prepfoots … er, Prefeet?

Looks like you’re going to fall off, but you won’t. Eventually you come to a switchback.

Make a u-ey back the other way and follow the path. At one point the path looks like it’s blocked, but it isn’t.

From there on out, it’s a more or less straight shot.  Despite the rain.

And  for your cork board, here’s the full path marked out on the map. 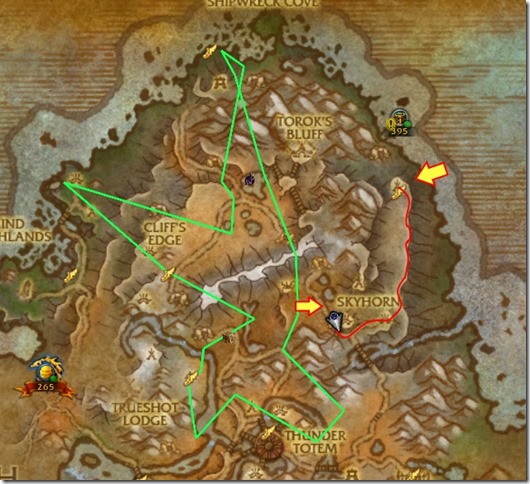 Once you get the flight point, you can go due north from there and find a steep path down to the sea, where a Kirin Tor puzzle World Quest pops occasionally, and if you continue north you will find some Highmountain WQs as well.

Posted on December 4, 2016, in A-delving we will go, HOWTO and tagged 7.1. Bookmark the permalink. Leave a comment.

← Awkward
It Kinda Grows on Ya →