← Wrong
The Sound of Silence → 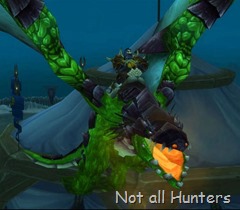 Having rankled for more than a few people, I’m sure, my thoughts on flying in WoW remain unchanged, but I want to give the flip side of the argument some air, because it is very valid.

My friend Zel brings up the way this impacts herb farming, as an example. I do hasten to point out that herb farming isn’t the lucrative endeavor it once was.  Making flasks for resale is just silly given current prices (I expect to see them go below 10g before too long); farming for glyphs doesn’t outweigh the convenience of buying herbs off the AH – the herb prices just don’t impact your profit margin that much. And selling herbs outright doesn’t (as implied) really bring a lot of cash to the table – hardly worth trolling SMV for choice cuts.

There’s this thing that you’re either for or against flying, by the way.  I think the angst and anger between the two sides at this moment is greater than that between Alliance and Horde. And that’s pretty silly, considering that one can be on both sides of this.

I have my own problems with flight-less WoW, and most of them resolve down to inconvenience and annoyance.

It is very inconvenient and annoying to, for example, try to get to some of the more obscure corners of Draenor right now. Why? Because you have to navigate these huge mountains and ravines just to go from A to B, much less the obscure Point Z. And the maps are not very helpful in this regard. Also, I don’t think I’ve ever seen such a set of convoluted zones as I have in Draenor. It’s a perfect storm of angsty goodness that makes even me want to rezz up the old roflcopter and fly on over there.

The thing is, I find that as I give myself time to develop tactics to deal with little annoyances like this, the less annoying they become. And that’s part of the problem, here. People have not developed these strategies internally because they either feel they haven’t needed to (i.e. “flight is coming”) or shouldn’t have to (“fuck Blizzard”).

But it also comes back to the problematic skills that the terrain designers have. Instead of a stick – “no flying, you’re not paying attention to our bootiful landscapes” – how about a carrot – make the ground route a nice place to be, something enjoyable and maybe somewhere south of 50% annoying.

So while I completely get and embrace the no flight evermore approach – for limited reasons – I also get very much why this is frustrating and, believe it, I am feeling those same frustrations.

Let’s just say that if it weren’t for WoWHead, I’d’ve given up and moved on to another game by now. And that’s a very strong indication that you have issues with your terrain design. It should be possible to sort most of this out with in game resources.  I agree that parts of the map should be reserved for those that have a lot of Dora in their veins – those that enjoy the exploration part of the game – but nothing important should be as hard to get to as the Time-lost Glade, not when it’s a key part of a major component of the endgame gearing circle-jerk.

So, pro-flight people, don’t for a second think I don’t empathize and agree, but also don’t think for a moment that I think it’s worth pitching a fit over. It is what it is. The minute that becomes too annoying to pay 22000 gold for, I’m back to playing marathon sessions of Sins of a Solar Empire or Civ 5, like I was before WoW even came out.

Bottom line here is that, regardless of which way this goes, Blizz done messed up and removing Flight is their version of mayonnaise, which cooks use to cover their mistakes.  All the anger, all the ragequitting, all the angst belongs squarely on the shoulders of senior game management, and nowhere else.

Sadly, I doubt they’ll ever understand that.  They will say the words, but they will never, truly, own their mistakes.

And that’s the greatest disappointment.

← Wrong
The Sound of Silence →